This comes after President Nana Akufo-Addo told the Finance Ministry to expedite the process and pay an amount of $45,000 to D.K Poison.

D.K Poison has been chasing the money for more than half of his life but there appears to be light at the end of the tunnel.

The latest update and willingness of the Nana Addo government to pay the contentious money comes after the former world champions and his lawyers sent a petition to the Presidency in September 2019 asking that he be paid the amount of 45,000 USD which he loaned to the state of Ghana over four decades ago.

Although no records are available to prove that the boxer loaned the state money as he claimed, those familiar to the events of the time say it did happen and the lack of documentation was because of the love and trust that D.K Poison had for the state during a time of crisis at the time.

According to various accounts, having won his second title defense against Shigefumi Fukuyama in Japan in 1976, D.K Poison was asked by the then Military government led by General Kutu Acheampong to loan his fight purse to the state to enable it purchase mackerel during an economic crisis period.

He has tried without success to retrieve his money from various governments but to no avail.

In a letter signed by the Secretary to President Nana Asante Bediatuo, the Finance Ministry has been instructed to ensure that the money is paid to the 69-year-old D.K Poison. 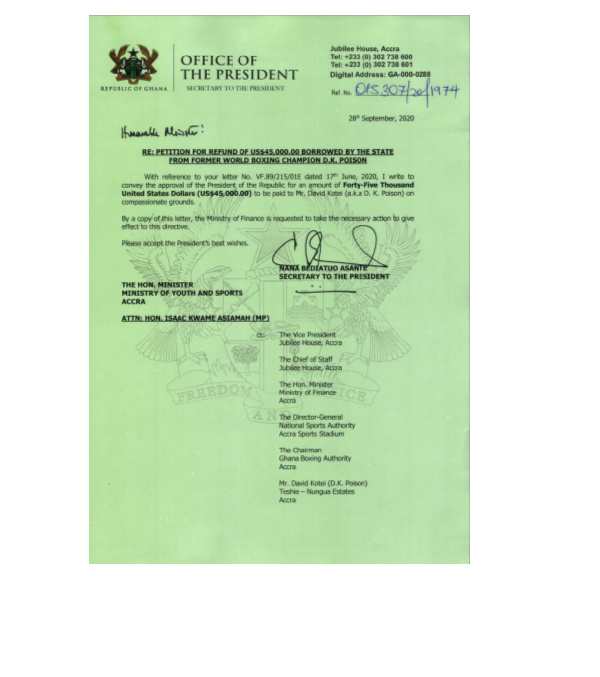 Atletico Bilbao Star, Inaki Williams Mother reveal why her son will not play for Ghana

BREAKING: GFA to close down stadium of clubs not abiding the 25% attendance rules.

Golf Legend, Tiger Woods Undergoes Back Surgery For The 5th Time As He Halt His Season