Pastors can be wonderful individuals, serving as mentors, teachers, confidants, and friends but what happens when such persons are always saddled with outrageous scandals?

Although there are hundreds of such men of God in the country, Prophet Nigel Gaisie’s name leads pastors who have in recent times been indicted all kinds of wrongdoing.

From taking advantage of congregants, and being promiscuous to getting actively involved with politics, these are the number of times the Founder and leader of the Prophetic Hill Chapel, has been accused of doings things pastors shouldn’t do.

He has confessed to sleeping with several ladies despite the fact that he is married. The prophet who admitted that women are his biggest weakness stated in an interview with Blakk Rasta said that he has ‘fallen’ several times to such temptations but now he tries as much as possible to stay focused.

Prior to his confession, he has been accused by many including Mr Kennedy Ayapong for having many sexual partners including people’s wives.

Nigel Gaisie allegedly involved with the murder of Wendy Morris

Not only has he been accused of sleeping with several women but also killing one of his side-chicks named Wendy Finn Morris for fear that she may leak his ‘hidden’ secrets to the public domain.

This was alleged by Assin Central MP, Kennedy Agyapong.

chick – Wendy Finn Morris that the "Man of God" allegedly chopped & later murdered for fear she may drop his secrets . . . . #celebritiesbuzz 📹: NET 2 TV

Ghanaian singer Mzbel, who is a known sympathiser of the National Democratic Congress (NDC), says Nigel Gaisie’s prophecy about Prof. Jane Naana Opoku-Agyemang being a running mate to NDC’s John Mahama in the upcoming 2020 election is fake.

According to Mzbel, he is a liar because a member of the NDC had long informed the pastor of Mahama’s choice. 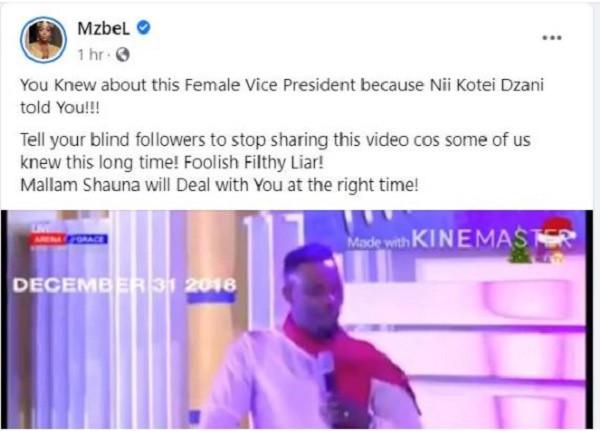 Predicting doom prophecies including the death of Ebony Reigns

The man of God predicted the death of several Ghanaian celebrities including the late dancehall singer Ebony Reigns, Efya, Kwesi Arthur, among others.

Following his prediction of the death of late Ebony which indeed came to pass, the prophet faced several backlashes from Ghanaians with many accusing him of being behind the death of the much-loved dancehall artiste.

During one of his prophetic sessions, the founder and leader of the True Word Fire Prophetic Ministries told Lilwin who had visited the church for the first time that Zack had bought a padlock and handed it over to a spiritualist to lock it.

This, the prophet said, was as part of Zack’s efforts to obstruct Lilwin’s progress.

He said: “Someone has sent you to a spiritualist to bind you. This is being backed by the younger sister of your mother who is a twin. I hear a name like ‘Zack’. Someone has bought a padlock and handed it over to a spirit to shut you up. That person is called Zack,” he stated.

But responding to the prophecy, angry Zack dared Gaisie to provide evidence, failing to do so, he says will result to a suit.

Zack further swore he has no evil intentions against Lilwin.

“If I have ever cursed Lilwin or sent him to a spiritualist, may God deal with me drastically. Nigel Gaisie, I give you one week, I’ll take legal actions against you. I give you just a week to prove which spiritualist I sent Lilwin to. If he says he’s a man of God, I give him just a week; he’ll hear from me,” said Zack in a video.

The pastor was named among persons who defaulted in the payment of their loans by the Student Loan Trust Foundation (SLTF).

The controversial man of God was captured with student ID 10232543 from the University of Ghana City campus where he took the loan to support his education.

According to documents sighted by MyNewsGh.com, the amount and its accrued interest started from March 23, 2009 and as at November 25, 2019 he was yet to clear himself.

He confessed to smoking wee at age 10

Speaking on Metro Tv’s ‘Good evening Ghana’ he disclosed that he started smoking at age 10.

Explaining his reasons, Prophet Nigel stated that he was from a poor background where his mother was the bread winner of the house.

He added, the that fact his mother would leave home very early and came back very late made him adopt such practice.

Prophet Gaisie is considered a Pro-NDC pastor because of his favourable election predictions about former president Mahama.

He has severally tipped former President Mahama to win the elections while on the other side of the coin, Rev. Owusu Bempah and others have tipped President Akufo-Addo to retain his seat.

The two (John Mahama and Nigel Gaisie) has established some level of friendship following the prophecy.

Speaking in an interview with Onua FM on August 20, Mzbel disclosed that Nigel Gaisie revealed to her that Stacy Amoateng is HIV positive.

The singer also revealed that Nigel Gaisie informed her of assisting Tracey Amoateng with prayers to overcome the deadly sickness.

She ended up in the grips of the police CID and was charged with defamation of character after Stacey reported the incident.