The Board of Governors of the Achimota School has revised its earlier decision to freeze a High Court directive ordering it to admit two Rastafarian students Tyrone Marhguy and Oheneba Nkrabea into the school.

A statement issued on Wednesday, June 2, 2021, explained the decision following consultations with the two stakeholders on the way forward.

“Further to our statement issued on 1st June 2021 on the subject of two Rastafarian applicants, we have been in consultation with other relevant stakeholders to seek the best ways forward, taking into account the interests of all parties,” the statement read

The school’s board however said it remains committed to an appeal against the ruling by the High Court.

“While the Board remains committed to the appeal against the High Court ruling, it will withdraw the application for a stay of execution pending the determination of the appeal by a higher court,” it explained. 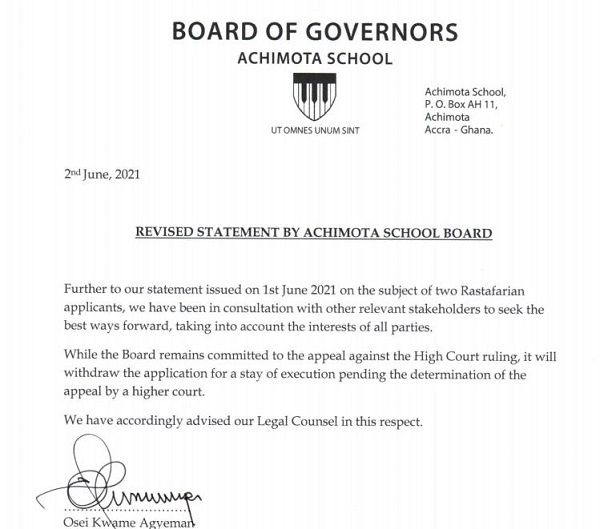 Meanwhile, in an earlier statement issued on June 1, 2021, the board of the school said they have instructed the school’s lawyers to appeal the court’s decision as they disagree with the ruling.

The saga began when the Achimota School refused admission to Tyrone Iras Marhguy and Oheneba Kwaku Nkraba over their hairstyles after they both passed their basic school exams and were placed in the school by the Ghana Education Service.

The family of the two subsequently sued the school for discrimination and asked the court to compel the school to admit them, citing religion and belief as the basis for the dreadlocks.

On Monday, May 31, 2021, the Human Rights Division of the High Court, presided by Justice Gifty Agyei ordered Achimota School to admit the two students.

Justice Gifty Agyei Addo giving her ruling pointed that the fundamental human rights of the two students cannot be limited by the rules of Achimota School.

Nigerian man arrested in Ghana after he allegedly knocked down a woman with his car and dumped her in bush where she died.