President of policy think tank, Imani Ghana has said his outfit vehemently disagrees with the method which the Finance Minister and his team deployed in the Agyapa Royalties deal.

According to him, the same resentment they held against some controversial deals like the PDS, Kelni GVG, and the Bauxite deal, it is the same they hold against the Agyapa Royalties deal.

But unlike some critics on the side of the opposition NDC calling for the head of the Finance Minister, Mr Cudjoe argues that Ken Ofori-Atta is competent in handling the affairs related to his office.

Franklin Cudjoe while recounting some old encounters with the Finance Minister on some related issues wrote: “Ken, our Finance Minister is technically competent and has generally been courteous to IMANI, but we have vehemently disagreed with him over a few issues such as KelniGVG, Bauxite deal, PDS (although we faulted the US government as well) and now Agyapa.”

His Facebook post dated November 3, 2020, further read “the last time we discussed Agyapa at the ministry, I told him IMANI was not against capitalist maximisation of our mineral assets but disagreed with the method deployed.”

Imani Ghana is one of about 22 CSOs in the country that intensely came against the operationalization of the Agyapa Royalties deal.

The CSOs demanded amongst other things the withdrawal of the deal over claims of lack of transparency on the part of the government.

The deal which is to monetise Ghana’s gold royalties was subsequently taken to the Office of the Special Prosecutor for a corruption risk assessment to be conducted. The outcome of the assessment found some anomalies in the deal which is yet to be dealt with. 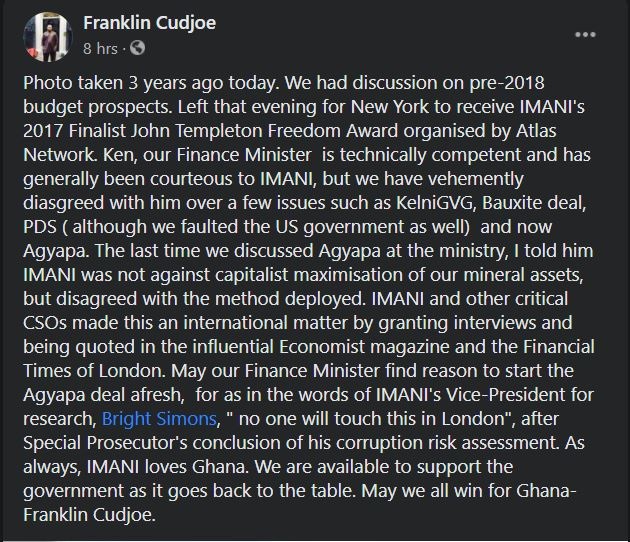 Akufo-Addo knows Ofori Atta, Gabby are stealing for him – Mahama