Few journeys to the top of professional football can compete with the story of Alphonso Davies – the Bayern Munich youngster who starred against Chelsea in the Champions League on Tuesday.

Born in a refugee camp in Ghana in 2000, his parents had fled fighting in the second Liberian civil war. They then moved to Canada as refugees when the player was five years old.

Davies joined the Vancouver Whitecaps youth set-up in 2015 at the age of 14, before making his MLS debut a year later, and his big break came in the summer of 2018.

That was when European giants Bayern agreed a Major League Soccer record £9.84m fee to sign the player the following January – and the teenager quickly found himself rubbing shoulders with superstars.

“He came up to me, shook my hand and said: ‘Hi, I am Arjen.’ In my head, I thought: ‘You do not have to introduce yourself.’

“When I signed, I posted a picture of me holding the shirt on Instagram and there was a comment that said: ‘Mats Hummels follows you, [but] you don’t follow him back.’

“I searched up his name, followed him back and he sent me a message saying: ‘Welcome to the team, look forward to seeing you soon.’ I replied back saying: ‘Thank you, I can’t wait to come.’

“Then more and more players started reaching out. At first I did not believe it was them but then they had the blue tick so it was the real deal.”

‘His development has been phenomenal’ 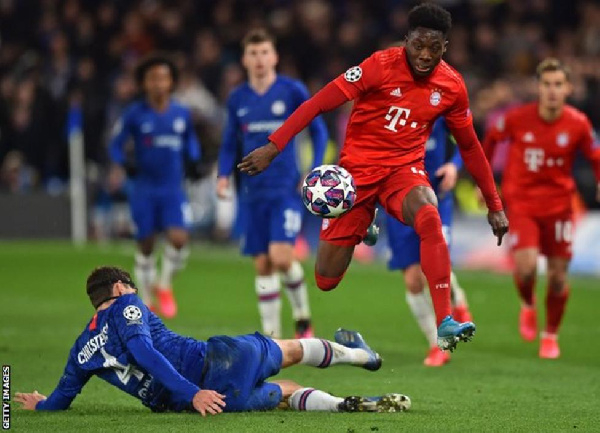 Davies has featured 26 times for Bayern so far this season, most recently as a left-back in Bayern’s 3-0 win at Stamford Bridge, when he set up the German champions’ third goal with a bursting run down the left and perfect pass for Robert Lewandowski.

It was a performance that saw the 19-year-old named man of the match by BBC chief football writer Phil McNulty, impressing both in defense and attack.

“Davies brings his strengths to the pitch and wins a lot of defensive balls with his pace,” said Bayern boss Hansi Flick.

“He was originally signed as a winger, but he’s doing an incredible job at left-back. His development has been phenomenal.”

The teenager said it was a “dream come true” to play at Stamford Bridge because his dad had been a Chelsea fan while growing up.

“I think we played well overall, we were defensively sound,” he said. “We attacked well in the first half and stepped it up in the second.”

Davies’ assist for Lewandowski was his third in the Champions League this season and seventh in all competitions.

Alphonso Davies’ parents fled Liberia in the civil war. He was born in a refugee camp in Ghana and moved to Canada when he was 5. Here he is playing beautifully for @FCBayernEN at 19. What a wonderful story.

He has won 17 caps for Canada, having become the youngest player to feature for his country when he made his debut as a 16-year-old in July 2017.

Oh, and the youngster is also a huge hit on social media platform Tik-Tok, with his sketch of a scene from US show Brooklyn Nine-Nine going viral.

“He’s a funny guy, he is very energetic and explosive, and has a good left foot,” said team-mate Thomas Muller. “He has skills others don’t and is certainly a man for the future.”