The GES last week dismissed the 14 final year students who took part in chaos and destruction of properties in their schools after the Integrated Science 2 paper of the ongoing WASSCE.

They were also banned from taking the rest of the papers in the final year examination.

The GES in a statement said the punishment was to serve as a deterrent to other students who are still partaking in the exams.

But a statement issued on Sunday, August 9, 2020, by the Director of Communications at the Office of the President, Eugene Arhin, said even though the acts of indiscipline by the students are intolerable, the President is of the view that the dismissal alone is enough punishment.

“The President believes that everyone deserves a second chance in life, and is thus, hopeful that the students will be allowed by the GES to take their final examinations as scheduled,” the statement explained.

Before the statement from the Presidency on Sunday, various institutions and individuals, including a former Deputy Minister for Education, Samuel Okudzeto Ablakwa, had said the GES was too harsh in the punishment given to 14 students.

The National Democratic Congress MP for North Tongu said although the acts of indiscipline and vandalism are condemnable, the GES seems to have killed an ant with a sledgehammer.

Below are the affected students 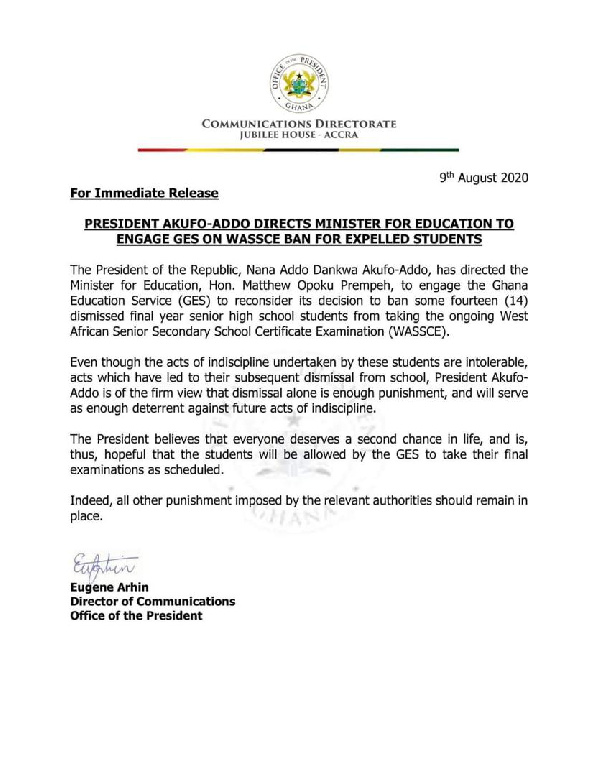