Child labour remains prevalent in Ghana despite many attempts by both the government in addressing the situation.

One of many breeding grounds for the phenomenon is in the marketplaces where many children continue to work to fend for themselves, some with the full support of their parents.

GhanaWeb as part of the World Day Against Child Labour marked on the 12th of June to raise awareness and activism to prevent child labour, visited the Agomanya market, one of the biggest and famous markets in the Eastern Region, to observe how children mostly between ten and fifteen years, engage in menial works.

They were spotted with wheelbarrows and trucks, carting light and heavy goods for market women and traders.

Fifteen-year-old Ofori Benjamin who is actively engaged in ‘wheelbarrow pushing’ at the Agomanya market said he has been operating in the business for the past one year.

GhanaWeb caught up with him in the shed of his mother who is a trader at the market.

Speaking to GhanaWeb, he said pushing the wheelbarrow in the market enables him to raise money to fend for himself and support his parents.

The JHS two student revealed that he earns an amount of about GH¢50 each day he works in the market. 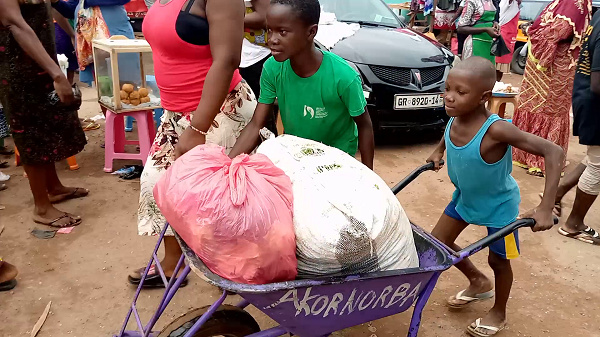 When questioned on what his typical day entails, Benjamin said, “I take the goods of the market women from their houses to the market in the mornings and take them from the market to the house in the evening.”

Benjamin complained of chest pains as a result of the heavy loads he’s forced to cart and said he is willing to stop the work if he gets help, adding that “some small job I’ll do to help my mother.”

Tetteh Joseph, a fourteen-year-old wheelbarrow pusher who has also been in this business at the market for one year also makes between GH¢45 and GH¢50 a day which he gives to his father for his upkeep.

According to the JHS one student, his father is incapacitated due to an accident he was involved in and stipends from this help him support himself and his father.

He’s however willing to stop the job which he said affects his health.

“I want to stop…I feel pains in my chest,” he said.

Kwaku Francis, a fifteen-year-old class five pupil has worked in the market since age 12 said. According to him, he makes between GH¢30 and GH¢40 a day working in the market.

He said he needs to work to take care of his grandmother. Unfortunately, he is exposed to health hazards associated with the heavy goods he is forced to take every day.

He appealed to the government to come on board and support his grandmother so that he can stop working in the market.

Grace Annor, market queen in charge of mat sellers at the Agomanya market who spoke on behalf of the market queen, Manye Susanne Korkor Kpabitey said the issue of underage boys carting goods in the market is a big issue to them, as education is free for all children.

According to her, executives of the market have taken a decision to sack all children below 18-years-from the market to rid it of the menace. 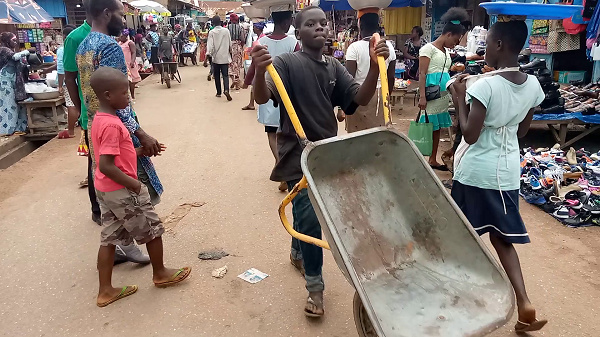 “This issue really bothers us a lot because government has made education free and these children must therefore be in school. We have therefore taken a decision to flush all under-aged children from the market by arresting all of them and sending them to the police station,” said madam Annor.

According to her, parents of the kids working in the market must take responsibility for them to prevent their children from coming to the market to fend for themselves.

She said efforts to get the adults among the truck and wheelbarrow pushers to elect executives to combat the menace have also proven futile and appealed to them to do the needful.

The leader of the mat sellers who said previous efforts to flush out the children have proven futile appealed to the Municipal Chief Executive (MCE) for the area, Simon Kweku Tetteh to assist their efforts to resolve this issue. 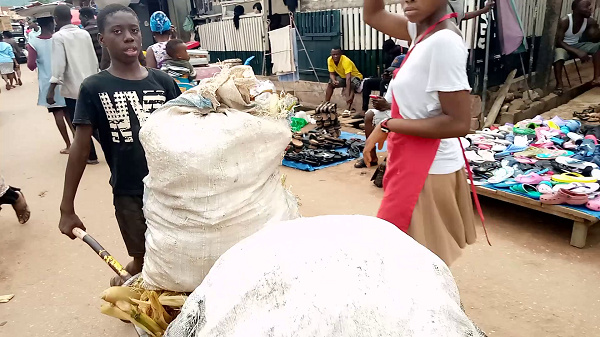 Detailed account: The machinations against Bridget Otoo that nearly got Randy Abbey to resign

#FixTheCountry Demo: Here are some placard messages protesters have for President Akufo-Addo (photos)