Some Polling Station Executives and supporters of the ruling New Patriotic Party(NPP) in the Assin Central Constituency have cautioned their Member of Parliament Hon. Kennedy Agyapong to stop disrespecting them or pay dearly for such an attitude.

The polling station executives say the time has come for them to confront the MP over this attitude as it’s very bad.

“Hon. Ken Agyapong always sits on both social media and traditional media and insults the people of Assin Central calling us lazy people yet he needs our votes and we are going to show him during the upcoming 2020 elections that he cannot continue to disparage us.

“He doesn’t respect us because he finances the party and he is backed by the Central Regional Chairman of the party Mr. Robert Kutin Junior. So we are warning him to stop being arrogant towards us for we have already decided to vote massively against him in the upcoming NPP parliamentary primaries.” Isaac Armah said after a demonstration today. 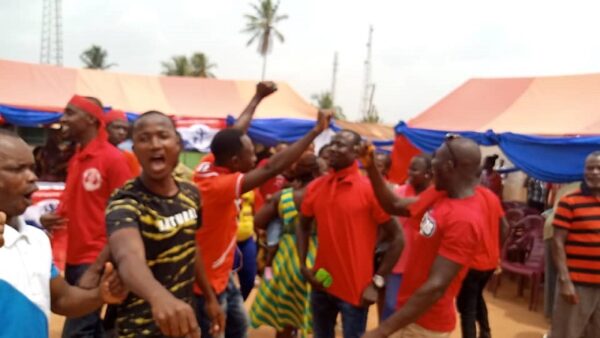 The long-serving Member of Parliament in the Central Region, Kenedy Ohene Agyapong, will for the first time in 20 years be contested in the party’s primaries.

Some party members have said they prefer to change the MP this time around as they need a fresh brain to steer the affairs of the constituency.

One of his contenders, Mr. Joseph Aninkora -Kutin was reportedly forced by the party executives to step down and allow Kenedy Agyapong to go unopposed.

Mr. Eric Baidoo the only candidate to have filed his nomination forms to contest Hon. Ken Agyapong, in an interview with Kasapa FM News Yaw Boagyan warned the party executives to throw away any intention of disqualifying him, adding that such a move will hugely affect the party’s chances in the 2020 elections.

He believes he’ll emerge the winner if the party executives are fair and create a level playing field for the upcoming contest.

NDC Must Be Locked Down, Released After 2020 Polls – John Boadu

Mahama urges use of Stabilization Fund to fight Covid-19