Some 42 years ago today on June 4, 1979, many Ghanaians woke up to a radio announcement by the late Flight Lt. Jerry John Rawlings of a change in government by the Armed Forces Revolution Council (AFRC).

Known as the June 4th revolution, the Supreme Military Council II led by General Fred Akuffo was ousted from office by the AFRC.

The reasoning behind what many described as a coup at the time but is now known as a revolution was borne out of a combination of many things gone wrong with the country at the time.

These included; bad governance, corrupt practices, a lack of discipline among the ranks of the army which was said to have frustrated many Ghanaians.

Today in History, GhanaWeb brings an image of how the state newspaper, Daily Graphic reported the takeover of government by the Rawlings military regime.

The image which was captured on the front page of the newspaper on Tuesday, June 5 1979 read; ‘ACCRA AT STANDSTILL”

The edition number 8901 was filed with an image of the former Ghanaian leader dressed in his full military attire with an associated image of citizens taking to the streets of Accra.

See the image below: 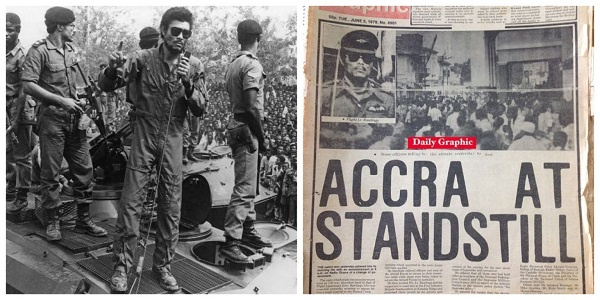 Another govt ambulance sighted in mechanic shop rotting away