A viral video purportedly shows a part of the Trump’s “indestructible” border wall collapsing under strong winds and heavy rains from Hurricane Hanna.

The video posted to Twitter by journalist Yadith Valdez on Sunday, July 26, shows construction workers standing by and watching helplessly as fierce gusts knock down the steel structure separating the US and Mexico. 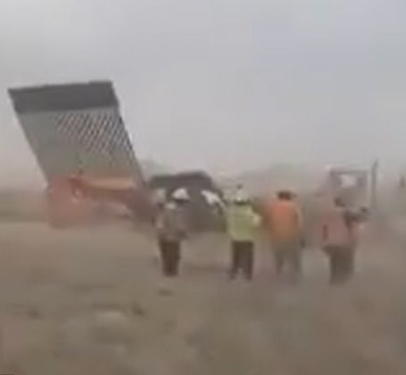 Some Twitter users pointed out that Trump boasted a few weeks ago that his wall is “the most powerful and comprehensive border wall structure” in the world. However, others questioned the validity of the footage.

Mexican news outlet Debate claimed in an article that the video was filmed at a section of the wall dividing Texas from Ciudad Camargo in the state of Tamaulipas.

However, Washington Post reporter Nick Miroff refuted that report in a tweet, saying that Customs and Border Patrol officials told him the video was not recorded in the Rio Grande Valley.

Miroff wrote: “Unclear where it was filmed, but based on desert terrain, daytime recording and style of bollards, I’m guessing these are images of a monsoon out west, prob Arizona.”

Watch the video below.