The Ghana Commercial Bank (GCB) has said a story making rounds on social media that some GH¢52 billion belonging to the Ghana Revenue Authority (GRA) could not be accounted for after an audit is false.

Reacting to the allegation that was first made by social media commentator, Kevin Taylor, on Monday, November 30, 2020, the bank said in a statement that the claims are mischievous and designed to discredit the bank.

“The said letter currently circulating mostly on social media with the captions, ‘Audit Service Reports if GHS52.5 billion transferred from GCB Bank to unknown sources’, alleges that a total amount of GH¢52.5 billion was transferred from GCB’s account to unidentified sources. This is false and mischievously designed to discredit the bank,” the Corporate Affairs Department of the bank said in the statement.

The Audit Service has also debunked the claims made against GCB Bank.

According to the statement, the audit exercise in reference was an exercise sanctioned by Finance Minister Ken Ofori-Atta in a letter dated August 15, 2020, based on the mandate of the President.

It said the letter in circulation on the matter forms part of letters sent to commercial banks that participated in the transfers.

It added that the Audit Service intends surcharging any bank which defaulted in the tax receipts collected.

It further disclosed the Service has managed to trace with satisfaction, some of the transfers.

Read GCB Banks full statement on the allegations below. 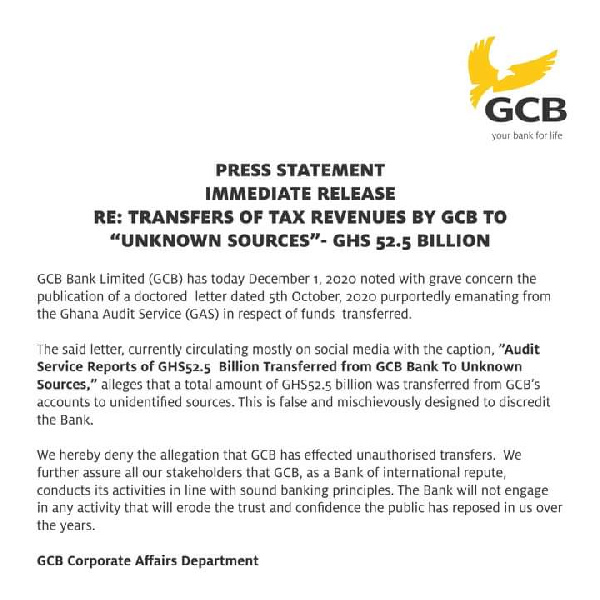 MTN Ghana gets green light to buy back over 1million shares