Member of Parliament for Assin Central in the Central Region, Kennedy Agyapong has taken a swipe at former President John Dramani Mahama as he strongly believes the latter can’t help the progress of the country, asking Ghanaians not to vote for the National Democratic Congress.

According to him, the forthcoming polls will determine the future of Ghanaian children and for that matter, encouraging women who take care of the house to vote in their numbers for the Nana Akufo-Addo led New Patriotic Party (NPP) so they can be relieved from their burdens.

The NPP fireband who was addressing the campaign launch of Kofi Ahenkra Marfo, the parliamentary candidate for Achiase in the Eastern Region said
the posters of former President John Mahama and his parliamentary candidate on the walls of Achiase Community alone look like a drunkard and they cannot see to the development of the nation.

Justifying his reasons, the legislator quizzes that “John Mahama after exiting the Jubilee House is struggling to get the needed stuff to make a living. When he speaks after midday he doesn’t make any sense because by then he had taken in Apketeshie. Mahama governed the country into a ditch, he gave GHC5 billion loan to Unibank, where is that money?.

According to him, he wants Mahama to come out publicly and explain the whereabouts of the money he gave on loan after accusing President Akufo – Addo of collapsing banks.

He said the country could have been in mess amid coronavirus pandemic if John Mahama was at the helm of affairs.

“Nana Addo has proved his worth for the nation because he has implemented a lot of flagship programmes like free SHS, NABCO, planting for food and jobs, one district one factory and others.
Cocoa farmers too have not been left out because there has been an increment in producer price which shows the NPP thinks about the wellbeing of Ghanaians.

“I will plead with Ghanaians especially women not to be carried away by John Mahama’s fake promises as he believes they suffer the most when there is hardship. Mahama is promising to give artisans money when elected is a lie. He has been there before and could not do that, it is just propaganda, he can’t deliver,” he said.

He stated that the NPP government thinks about the wellbeing of both the rich and the poor, unlike the NDC government that was mainly concern about chopping money.

Mr Agyapong, therefore charged Ghanaians to vote immensely to show appreciation to Nana Akufo-Addo and his NPP government for the great work they’ve done in the first four years in office. 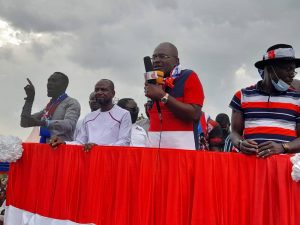 He said, education in the area is low, aiming to do his maximum best so that they can improve on education for the betterment of the people.

He has also promised to improve on agriculture, health and others when elected into office in the December general elections.

“I have been the chairman of the party for nine good years so I know the challenges confronting the area and I know how we can solve them,” he said.

He has therefore called on the people to vote in their numbers for him and the president and is of the view that a lot will be done in the next term of Akufo Addo government.

Nurses to sign agreement on Tuesday, no strike for at least 2 years