A man by the name of Samuel Kwaku Sakyi, a tricycle rider, was imprisoned after he was unable to settle a GH-1,800 fine.

Samuel Kwaku Sakyi told the Crime Check Foundation his story, stating that he was provided a tricycle to work hard and pay.

There was, however, no fixed sum for him to soon follow in the calculation as to whether all the money could be repaid.

While he began with a quantity of GH100 sales, as time passed on, his sales decreased; something Samuel Blamed on his girlfriend named Ama who he gave money to look nice so she doesn’t abandon him.

Samuel suggested that he did not save a penny to buy clothes or even save for a sunny day when giving Ama a piece of the money he made.

After one year and twelve weeks of serving for his boss, Samuel suggested that he felt he had accounted for the money used to purchase the tricycle and chose to run away with the tricycle.

Yet luck eluded him as he was convicted, indicted and fined for paying GH 1,800 that he could not pay, so he had to spend 18 months in prison.

That being said, Samuel Kwaku Sakyi, whose fine was provided by the philanthropist, Ali Ibrahim, found luck. 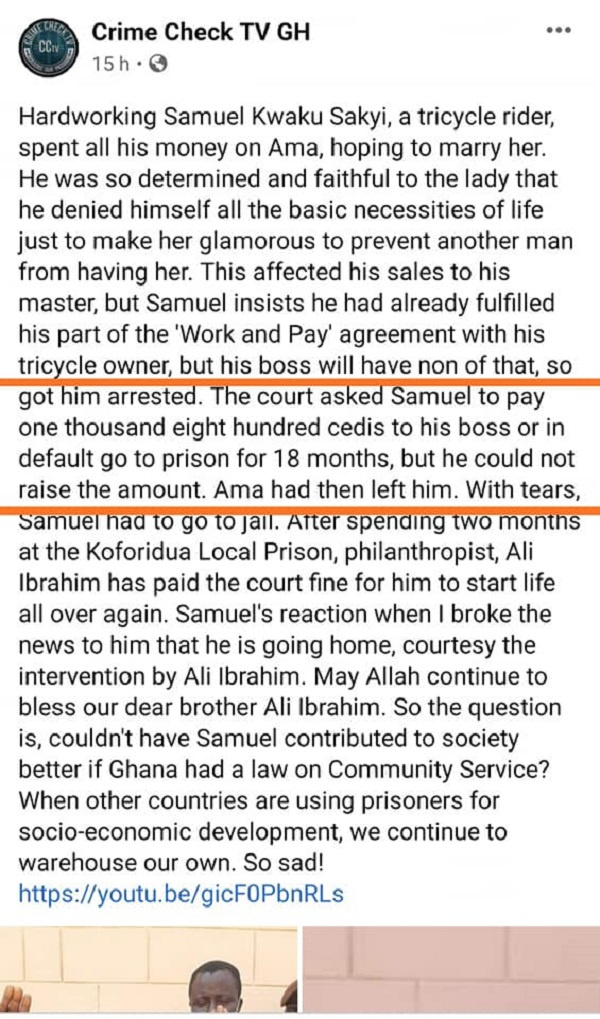 WATCH LIVE: Auditor General Domelevo arrives in his office using backdoor at 8:20am amidst police

Parliament To Roll Out Plan For Vaccination Soon