The National Democratic Congress (NDC) has sacked about 18 of its failed parliamentary candidate aspirants for going independent.

Key among the 18 persons is Dominic Azimbe Azumah, a former minister and MP for Garu-Tempane Constituency in the Upper East Region. He is staging a comeback and has, according to NDC, opted to go independent in the 2020 parliamentary elections.

In a statement dated November 3, 2020, and signed by its General Secretary, Johnson Asiedu Nketiah, NDC says “the following members who sought and obtained nomination from the Electoral Commission to contest the upcoming parliamentary election as independent candidates have forfeited their membership of the party.”

It directed that “they must handover all party property in their possession to their respective constituency secretariats, and they must cease forthwith in using party paraphernalia and the name of the flagbearer in all their campaigns.”

It says party members who associated or endorsed the campaigns of the 18 persons also “suffer the same punishment as the independent candidates .” 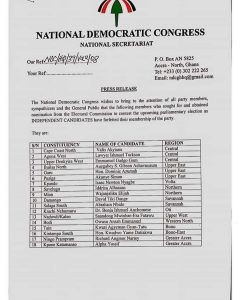 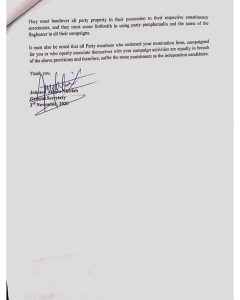 Mahama under siege on Facebook for ‘desperate and inconsistent’ tertiary promise

Election 2020: NPP man baths publicly to campaign for his party