The phrase that Nigerian militant group Boko Haram had been “technically defeated” is ringing increasingly hollow.

Seven months into his first term in 2015 President Muhammadu Buhari coined the term, but the group and its offshoots have never gone away.

The military has managed to retake territory and dislodged the fighters from some of their hideouts. But a recent spike in deadly violence, focused in the north-east, where the Islamist group began its insurgency in 2009, has led many to ask what is at the root of the authorities’ failure.

Already this year there have been nearly 100 attacks, according to one estimate. A number of military bases as well as towns, including Geidam and Damasak, a hub for aid workers, have been overrun. Hundreds have been killed and weapons, food and medicines have all been looted.

There are six main reasons why Boko Haram has not been defeated despite the government claims, experts say.

An over-reliance on a military strategy to confront Boko Haram is at the heart of the state’s inability to deal with the threat, argues security analyst Kabiru Adamu from Beacon Consulting.

“That’s why, unfortunately, almost 11 or 12 years into the counter-insurgency operation, we are not seeing major successes,” he told the BBC.

Experts say that it is not that people in the north-east sympathise with Boko Haram and its splinter group, the Islamic State’s West Africa Province, but that neglect from the authorities and desperation often drive people into the hands of the militants.

“The reality is that to address insurgency or terrorism, you need more than military operation. You need to address the root causes of the insurgency,” Mr Adamu says.

“Unfortunately we haven’t seen enough efforts in that regard.”

He points to a lack of good governance that leaves the population impoverished, frustrated and uneducated as “one huge root cause”.

There are major government initiatives that are meant to speed up development in the north-east, but little progress has been made.

There is also the National Counter-Terrorism Strategy which also involves economic development and counter-radicalisation, in addition to the deployment of troops. But Mr Adamu says it appears the strategy is not being fully implemented.

Others, like Security analyst at the Tony Blair Institute for Change, Bulama Bukarti, argue that along with deradicalisation there should be a huge surge in military activity similar to what was seen in Iraq and Syria when the Islamic State group’s so-called caliphate was dismantled.

The endemic poverty in parts of the region as well as the insurgents’ violent methods enable the continued recruitment of generation after generation of fighters, experts say. 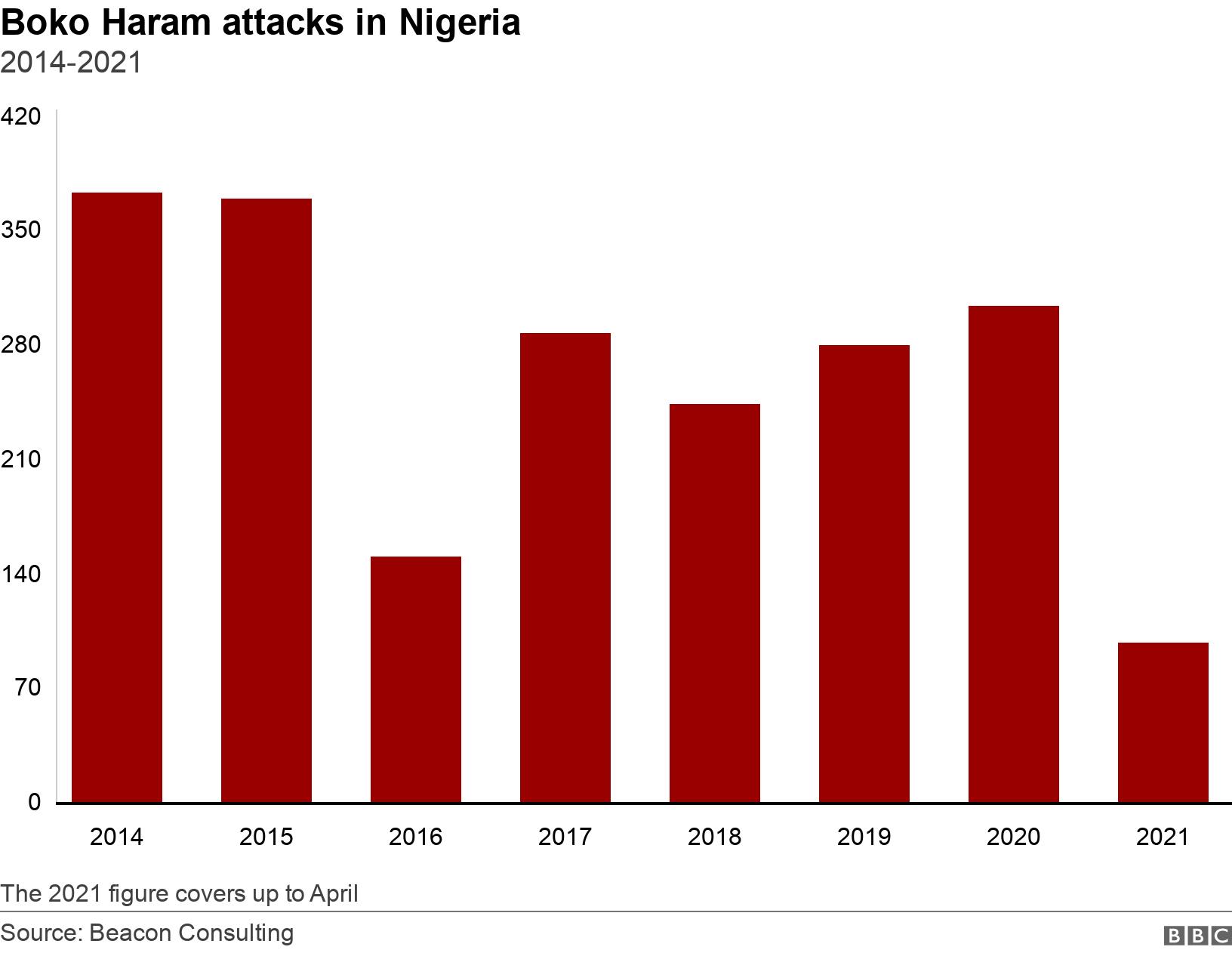 Borno state Governor, Babagana Zullum, recently told the BBC that the insurgents were even recruiting people who had previously been forced from their homes by the conflict itself.

Even when it comes to the fighting there is the problem of weaponry, according to Mr Adamu, who says that the military is ill-equipped.

Research by his firm, Beacon Consulting, found that there were about 6.5 million small arms and light weapons in circulation in Nigeria but just 586,000 are in the hands of security forces.

It is not the case that all of the remainder are being used by the Islamist militants, but the figures highlight that there are a huge amount of weapons available that are not in the military’s control.

Mr Adamu also says that “what we are seeing based on evidence is that these [armed] groups have a higher calibre of weapons, unfortunately, than the military”.

Corruption may be one thing that is holding the military back when it comes to improving its equipment. It is suspected that a lot of money meant to bolster the campaign against Boko Haram has ended up in officials’ pockets.

Mr Yalwa says that in some cases the fight against Boko Haram is not being fought with “sincerity” and “it seems some people have turned it into merchandise and are into self-enrichment”.

In recent years, the military was hamstrung by a US arms embargo over human rights abuses. President Buhari and his predecessor, Goodluck Jonathan, both complained that this was hampering counter-insurgency efforts.

But this was lifted by President Donald Trump in 2018 and as a result Nigeria is expecting the delivery of Super Tucano aircraft. This should build on the military’s air superiority, which Mr Adamu believes is not being used to its full advantage.

Although there are claims that even this superiority is not paying off.

Mr Bukarti told the BBC the insurgents appear to have “understood and adapted to the pattern of military airstrikes” and are taking advantage of the difficult terrain in Nigeria’s north-east to evade military attacks.

Gbagbo’s statesmanship must be commended

Meet A 68-Year-Old Granny Who Is Still A Virgin, Reveals Secret