Obiri Boahen was on the Kumasi-bound Starbow aircraft, ATR72-500 with registration 9G-SBF that skidded off the tarmac during its take-off run.

At least four persons were injured in that incident.

Joined to the suit filed at the Accra High Court is the Ghana Airport Company, the Civil Aviation Authority and the Attorney-General of Ghana.

In the suit sighted by GhanaWeb, Nana Obiri Boahen says “It is the negligence, lack of duty of care, recklessness etc of the agents/employees of the defendants which caused the accident.”

Giving his account of events shortly after the accident, Obiri Boahen said in his suit to the High Court that while embarking on the aircraft, visibility had become poor because clouds had gathered.

“It started to drizzle and heavy down [pour] followed…even as a layperson in the aviation industry it was quite clear that it was dangerous for the [Ghana Airport Company and Civil Aviation] officials monitoring the weather conditions to have signalled the pilots to take off,” he stated.

According to him, the control tower officials signalled the pilots to take off when it was very clear that visibility was blurred.

He adds that it was the failure of the cockpit crew to execute correct procedures in aborting the takeoff that caused the accident.

Mr Obiri Boahen says he spent a substantial amount of money the course of his medical treatment following the accident.

Since that 2017 accident, Starbow Airlines has suspended operations. 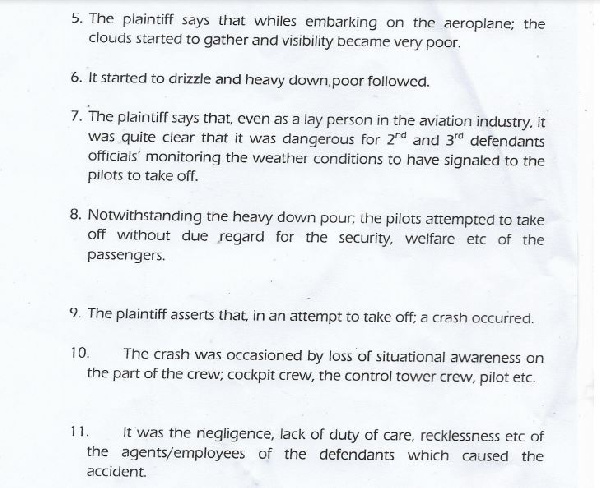 Manasseh Azure Explains Why He Won’t Take The Covid Vaccine

‘I will disown my child if he is gay’ – Allotey Jacobs

COVID-19 vaccines not Mark of the Beast; I’ll take it’ – Agyinasare

You’re Togolese not Ghanaian and age-cheated; your retirement due – Audit Service Board to Domelevo