The Presiding Elder of Pentecost International Worship Center(PIWC) in Koforidua, Eastern Regional Capital, Frederick Darfuor, escaped death Sunday morning in a near-fatal side collision accident while on his way to Church.

A Police officer yet to be identified allegedly jumped traffic light at Galaway near the Regional Police Headquarters and collided into the Toyota Corolla car which was being driven by Elder Frederick Darfuor who had the right of way.

The impact of the crash pushed and u- turned the Toyota Corolla while the Nissan Murano with registeration number GE 2616-20 knocked off a traffic signal light pole and crashed at the roadside. 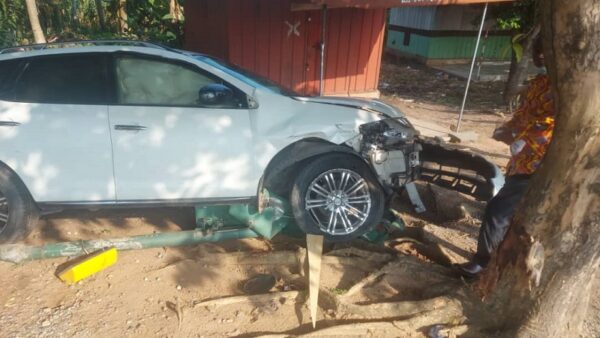 Eyewitnesses alleged that the Police Officer was being driven by a woman.

Occupants of both vehicles were injured hence rushed to the Eastern Regional Hospital.

Elder Frederick Darfuor was treated and discharged but the Police Officer and the other woman are still on admission.