The running mate of former President John Mahama for the December 7 elections, Professor Naana Jane Opoku-Agyemang has started her campaign tour with a visit to the mother of the late former Vice President, Paa Kwesi Bekoe Amissah-Arthur.

On Thursday, she paid a courtesy call on the mother of the late former Vice President, Effie Amissah-Arthur to receive her blessing for the task ahead.

In a post on Facebook, a leading member of the NDC, Samuel Okudzeto Ablakwa stated, “incoming Vice President, Prof. Naana Jane Opoku-Agyemang pays a special visit to mother of former Vice President, H.E. Paa Kwesi Bekoe Amissah-Arthur. She continues to show deep respect for all her predecessors as she relies on their inspiration & blessings for the task at hand.”

Earlier on Wednesday, two days after she was officially outdoored, the former Vice-Chancellor of the Cape Coast University visited her hometown, Komenda in the Central Region to meet with the chiefs and people of the area.

After one of the encounters, Prof Opoku-Agyemang wrote, “the rousing support from my hometown, Komenda goes beyond the joy of being associated with this milestone. It also amplifies the realization that there is a place for us all, to rise up and be seated in positions where we can effect change. The time is now!” 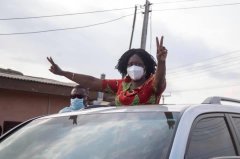 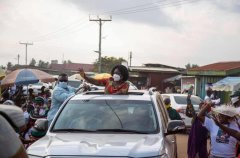 God himself will not even acclaim to stop corruption, neither can I – Kissi Agyebeng