A former Local Government Minister under the erstwhile Jerry John Rawlings administration has indicated that he was under intense pressure from Rawlings to award a waste management contract to Eddie Annan, a known NDC financier and businessman said to be a confidante of the former president.

On pages 136 and 137 of his book “Working with Rawlings”, Prof Kwamena Ahwoi, narrated that, during Rawlings’ second term in office as President, the Ministry of Local Government successfully negotiated a waste management contract between a company called City and Country Waste Limited and the Accra Metropolitan Assembly (AMA).

He explained that this was part of a deal the Ministry of Finance agreed to with the Accra Metropolitan Assembly (AMA) “which in turn contracted with City and Country Waste Limited for the importation of heavy-duty waste management equipment from Canada to be used for waste management in the Accra metropolis.”

Prof. Ahwoi explained that he was not happy with the structure of the contract between the AMA and the company.

“I was also concerned that we did not know of the track record of the Canadian company that was actually to execute the contract in terms of waste management. I formally wrote to the Attorney General for a legal opinion on the contract. I also constituted a five-person delegation led by my Deputy, Mrs Cecilia Johnson to visit Abidjan and Dakar where we learnt the Canadian company was undertaking similar projects and report on its performance,” Prof Ahwoi’s book said.

He also stated: “City and Country Waste Limited was a joint Ghanaian-Canadian venture owned partly by Mr Eddie Annan, a known NDC financier and a close friend and confidante of President Rawlings and his wife.”

“When President Rawlings realised that I would not give the authorisation until I had finished with my consultations and checks, and seeing that this was going to result in considerable delay, he went behind me and directly ordered Mr Ishmael Ayittey to sign the contract,” Prof Ahwoi recounted. “Mr Ayittey did.” He explained that this led to the cancellation of the contract when NPP came to power in 2001 and also sold the equipment to private individuals.

Prof. Ahwoi stated that AMA could not pay the damages, therefore, the court ordered the sale of its properties including the AMA head office and residence of its MCE.

“The NDC government, which had returned to power at that time [of the judgement] in 2009, stepped in and got the judgement debt liquidated under arrangements with the District Assemblies Common Fund Administrator.”

Find below screenshots of pages 136 and 137 of “Working with Rawlings”. 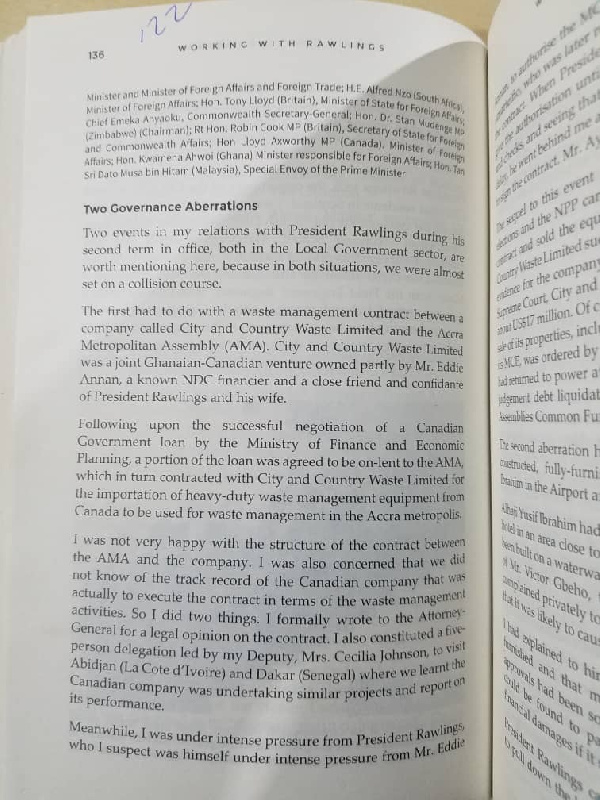 Baba Rahman: Is there a Chelsea future for Ghana star under Tuchel?

How Kennedy Agyapong predicted doom for Assin North MP in 2020