The Okyehene Osagyefo Amotia Ofori Payin has asked Government to suspend mining activities across for a period of one year.

According to him, the suspension will pave way for a review of the legal regime governing the mining sector. 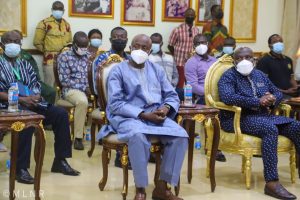 He made the call on Thursday, May 27, 2021, when the Minister of Lands and Natural Resources, Samuel Abu Jinapor called on him at his palace in Kyebi. The courtesy call formed part of the Minister’s two-day visit to the Eastern Region.

The Okyehene further called for the decoupling of the Minerals Commission from the Ministry of Lands and Natural Resources for the Commission to have the free hand to operate. 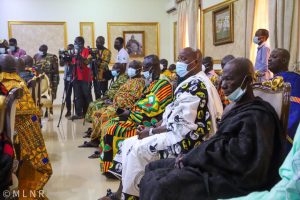 He said it was important for government to adequately resource the Minerals Commission in order to effectively carry out its mandate.

Touching on remuneration for mine workers, he said the disparity between the Ghanaian miner worker and others in other jurisdictions is too wide and must be looked at. 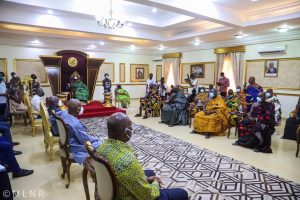 On his part, the Minister, Mr Jinapor noted that all the issues and concerns raised by the Okyehene will be tabled for further deliberations.