Isabele da Silva, wife of Chelsea defender Thiago Silva is impressed with her husband’s treatment of Ghanaian defender Daniel Amartey in Chelsea’s 2-1 victory over the foxes in a Premier League fixture.

Amartey has somewhat become an enemy of Chelsea after he was caught on camera throwing away their matchday pennant after their FA Cup clash over the weekend.

Despite an apology from Leicester which has reportedly been accepted by Chelsea, the players seemingly still harbor some resentment for the Ghanaian and charged towards him when they spotted him during Tuesday night’s encounter.

Amartey who had entered the pitch to separate a row between Rudiger and Ricardo was confronted by Silva and Mount.

The incident appears to have excited the wife of Thiago Silva who in a social media post praised her husband.

Proud of her husband’s role in the scuffle, Mrs Silva tweeted a photo of the incident with the caption: “that’s right, Thiago Silva shows who’s boss.” 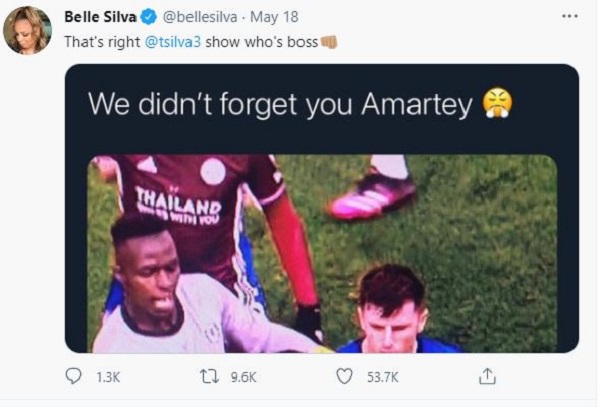