A young man by name Anthony Somevi has taken to Facebook to narrate his ordeal at the hands of Western Togoland Soldiers.

A group of armed men belonging to the Western Togoland secession group this morning attacked the Aveyime and Mepe Police Stations in the North Tongu District of the Volta Region.

They broke into the police station on Friday dawn and found their way into the armory of the making away with all the weapons.

Reports say that three (3) police officers have also been kidnapped by the group.

Eyewitnesses who spoke to Joy News narrated that the armed men stormed the police station and asked them to leave their land.

Their confrontation resulted in a gun battle until the police officers were overpowered by the group.

The group, numbering about 50, is believed to be locals from Mepe, Aveyime, Battor, and surrounding communities.

The Ghana Police Service, later on, advised commuters traveling from Accra to Ho, Aveyime, Adidome, Mepe, Akuse, Sogakope, and Aflao to be cautious on such roads because of heavy vehicular traffic which is caused by some security operations in the region.

The group believed to be members of the Western Togoland secessionist group, Homeland Study Foundation attacked the Volta Region today breaking into police stations in some town and kidnapping some police officers in the process.

The Ghana Police Service, therefore, cautioned all commuters of the  Accra to Ho, Aveyime, Adidome, Mepe, Akuse, Sogakope, and Aflao roads to be mindful of heavy traffic due to the roadblocks.

A statement released by the Ghana Police Service through its Twitter handle read,

Good morning Ghana, commuters to and from Accra – Ho – Aveyime – Adidome- Mepe – Akuse – Aflao are likely to experience traffic due to security operations within those areas. Anybody travelling on any of these roads should exercise caution. 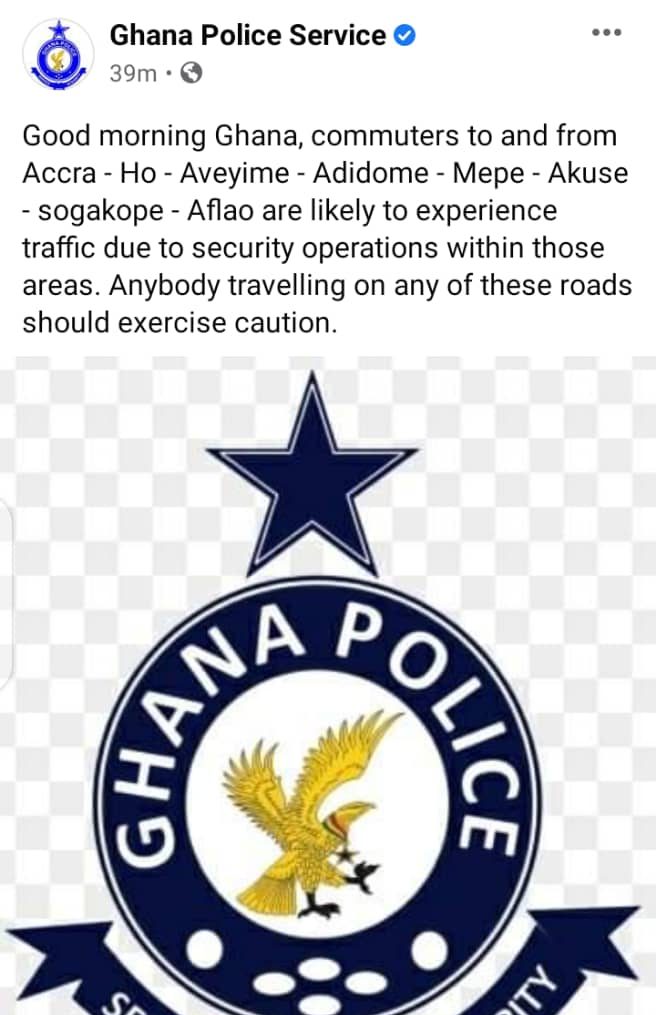 Executive Director of Jatikay Centre for Human Security and Peace Building Adib Saani speaking on the situation warned that Ghana should be ready for more terror attacks from the Western Togoland secessionists group, Homeland Study Foundation.

He said that the fact that they have started gaining access to weapons and now overpowering police personnel mean that they are becoming powerful and growing in number.

Ghana therefore should be cautious and ready for more attacks from the group.

He added that Ghana should not take the situation as a joke and that the country should prepare for more attacks in the coming days.

“Obviously, they are growing bigger and better by the day. Right before our eyes and the intelligence community. We should learn from Cameron, Mali, Congo and Nigeria. This is no joke”, he said.

The young man narrating his what he went through at the hands of soldiers wrote;

This Nonsense Must Stop!!
So my auntie and I needed to make an emergency trip to Battor in the Volta Region of GHANA. As early as 3:30am (With all the risks traveling at night) we set off from Accra and around 5:30am we got to Sege. We made a left turn towards Battor. About 15mins drive, almost getting to Aveyime, I saw a heavy traffic ahead with ARMED MEN ( this sh!t was intimidating). In the beginning we thought it was robbery

. Loaded guns were pointed at us ordering us to come down immediately (in fact I nearly pooped

)..
The things they were saying in ewe made me realized who they were afterwards (Mile miafe dukor x)m-We are taking our land) – The Western Togoland

. The experience wasn’t a nice one at all… What’s going?

My observations:
Because I could speak ewe especially the Tongu, they were gentle and a little friendly with me. I played the nice guy and that allowed me take these videos.
Now there was this man whose car was in front of us who spoke twi.. He was pleading with them calling of the guys “my brother”… The response that came from the armed guy was “Today de3 you know ewes are your brothers?” —— Do you see that? This thing must stop, tribalism and hate is brewing and it’s not safe at all…..
I managed to find another route through Dove to Battor and that one errr… A story for another day…
our leaders must act fast! This is not looking friendly at all….

This Nonsense Must Stop!!
So my auntie and I needed to make an emergency trip to Battor in the Volta Region of GHANA. As…

Election 2020: If you vote NDC into power, you’ll be doomed for next 4yrs – Asutifi North DCE cautions electorates