The Minority in Parliament said the members of the group have not been served personally to answer to charges of unlawful assembly following their march to the Electoral Commission’s office.

The Minority Leader Haruna Iddrisu explained that members of the Minority Caucus will nor honour the criminal summons from the state since they have not been served.

“We don’t respond and we will not respond to social media invitations by the Ghana Police Service. I have not been personally served as is the requirement of the law as well as many of my colleagues.”

Mr Iddrisu added that “the Ghana Police Service is allowing itself to be used as a tool of manipulation.”

They were expected in court earlier on Monday morning but did not show up.

The Accra Circuit Court 11 which was to hear the matter subsequently adjourned the case to January 19, 2021, in hopes that the police would have served the members.

In addition to the MPs, the opposition party’s deputy General Secretary, Peter Boamah Otokunor, has also been slapped with the same offence.

Per the facts, the legislators failed to notify the police before their march.

The statement of offence said they unlawfully assembled and conducted themselves “in a manner likely to cause persons in the Neighbourhood reasonable fear where a breach of the peace is likely to be occasioned.” 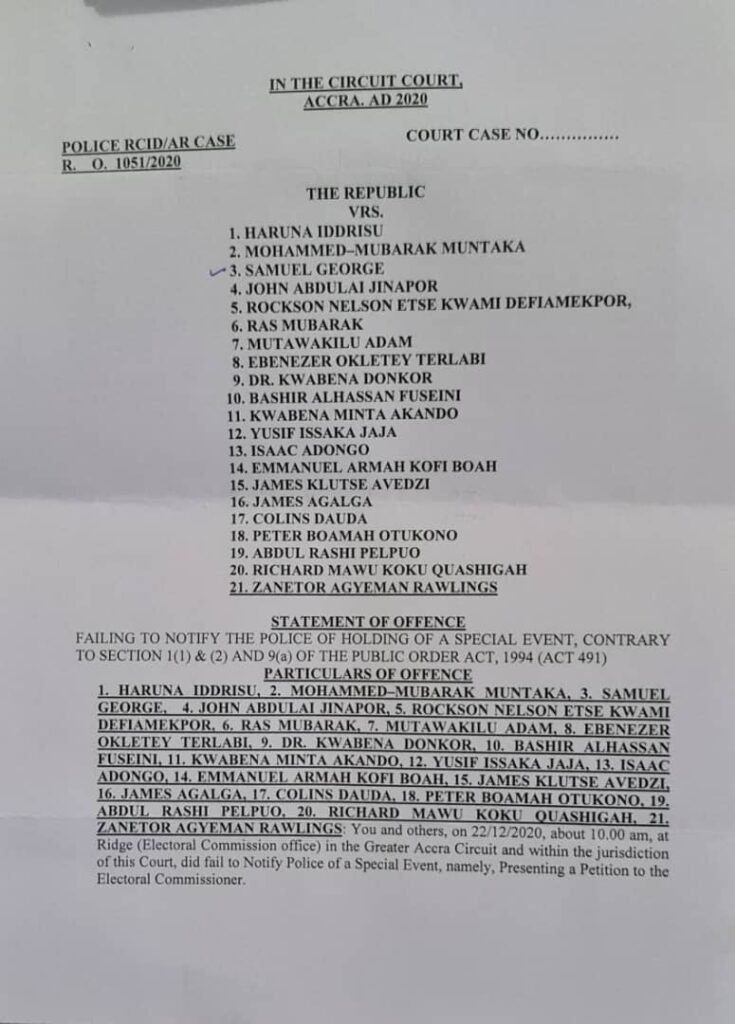 The Minority in Parliament on December 22 marched to the Electoral Commission headquarters to protest the results of the 2020 Presidential and Parliamentary polls.

The march came on the back of the continuous street protests by supporters of the party following the declaration of results by the chairperson of the Electoral Commission Jean Mensa.

The NDC and its flagbearer John Mahama described the results which gave President Akufo-Addo 51% of the votes as ‘flawed’.

The MPs intended to march to the EC Head office and present a petition to the Chairperson of the Commission over the results of the December elections.

But met the absence of the commissioner.