Small scale miners at Akrokeri in the Ashanti Region have vowed to vote 100 percent for President Nana Akufo-Addo and the ruling New Patriotic Party (NPP) in the December 7, 2020 polls.

According to the miners, there was no better and credible political party or candidate in the 2020 Elections than Mr Akufo-Addo and NPP.

They made the pledge on Monday, November 2, this year, when the Minister of Lands and Natural Resources Kwaku Asomah-cheremeh, and officials of the Minerals Commission visited the Akrokeri Community Mining site ahead of the launch of Community Mining Schemes for Obonso, Fumso, Adamso-Aplapo.

At the Akrokeri Community Mining site, the jubilant miners chanted “4more4Nana”, “4more to do more.”

They vowed not to work on December 7, 2020 to enable them go to their polling stations to cast their ballots for President Nana Akufo-Addo whom they described as a credible and honest person. 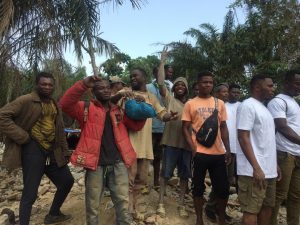 Some of the miners

Speaking exclusively to DGN Online, Ernest Obeng Frimpong, a board member of the Akrokeri mine, said at first, they (small scale miners) thought President Akufo-Addo had come to destroy small scale mining across the country.

He stated that they initially felt the President and his party were lying about the Community Mining Scheme.

However, he stated that they are now 100 percent convinced that indeed the President was taking the right decision by introducing the Community Mining Scheme.

“At first, we thought that he has destroyed our jobs,” he told DGN Online, adding that “But we didn’t know that he was putting in place measures that will help us.”

He said they have realized that indeed Community Mining Scheme was not a lie but a real commitment by President Nana Akufo-Addo and the NPP to make mining a decent and rewarding profession. 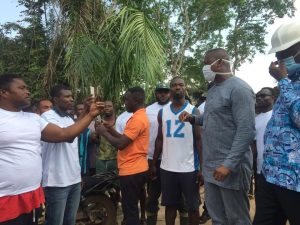 In the run-up to the 2016 presidential and Parliamentary Elections, Mr Akufo-Addo promised to introduce the Community Mining Scheme, to among other things help sanitize the small scale mining sector in Ghana.

Mr. Asomah-cheremeh urged the miners to adhere to the guidelines of the Community Mining Scheme.

He appealed to them to mine in a sustainable manner to raise money for the Development of Ghana.

Over one million people exposed to COVID-19 in Accra – Report