Mention Zimbabwe and Mugabe come in as apron string.  The nonagenarian was a protagonist in history’s drama.

He was larger than life and occupied a space no one could usurp.  Well, that was the notion until the Zimbabwean Army backed the man known in the country’s politics as ‘The Crocodile’ showed him the door out of power.

Ghana’s in-law fell from grace to grass. Old Bob was once married to a Ghanaian called Sally Mugabe. 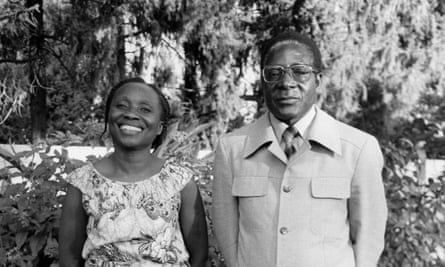 But aspiring running mates in the New Patriotic Party (NPP) and the National Democratic Congress (NDC) have found grace in Harare.

When the NPP was shown the exit in 2008, Dr Mahamudu Bawumia headed South to Zimbabwe.

He took up a job as Resident Representative for the African Development Bank in Zimbabwe from 2011 to 2012.

For a year, he was checking the economic balance sheet of old Bob.

Dr Bawumia was said to have taken the job at the invitation of Mr Mugabe, whose lands reforms got cheers at home and jeers in the West.

Mr Mugabe’s veterans and party members took hold of the policy meant to empower the black population and grabbed lands that in the end became home to more wild animals than tobacco and food crops.

He saw salvation in Dr Bamumia, who temporarily left his political needles in Ghana behind, to offer economic advice more than 7,250 kilometres from home.

The 2008 NPP running mate offered advice to nourish the Zimbabwean economy for a year from 2011 to 2012.

He returned to Ghana to face President Mills and his running mate in the 2012 elections.

But Mills took an early flight to heaven, leaving Mahama to partner Paa Kwesi Amissah-Arthur for the 2012 elections that ended up in court.

Dr Bawumia did not go back to the former Rhodesia. He remained in Ghana as pin on Mahama’s seat.

But seven years later, the continent lost Robert Mugabe—many see him as a tyrant with the appetite of a desert camel. But for a continent yet to cut itself from colonial influence, he was a conqueror—He still has a cult following across the continent.

But in truth, other than Mrs Mugabe, Old Bob left behind a mess of a country.

But three years before he died, the man who for a year offered him antidotes for Zimbabwe’s economic malaise became Vice-President.

Dr Bawumia had some kind words for Mugabe when he passed on.

“Talking to him you would hear a very well-read man and a deep thinker. He knew his world history inside out and could easily floor you with counter-arguments.

“He saw the challenges the Zimbabwean economy faced as a price the West made Zimbabwe pay for taking control of the land of Zimbabwe for the black population. That is, however, a discussion for another day.

“Today we salute an African hero who fought to liberate his people notwithstanding his own faults. May his soul rest in Peace,” Dr Bawumia said in a tribute.

At the time he went to Zimbabwe, Dr Bawumia had tasted Ghana’s campaign trail as running mate.

But there is another running mate that also took to the land of the Victoria Falls, but only as a former Minister of Education.

When the NDC was tossed out of office in 2016, Prof Naana Jane Opoku-Agyemang also headed south– Zimbabwe was her destination.

”Her joining of the University truly makes WUA a Pan African University of choice,” the university said.

Dr Bawumia lost the 2012 elections even after his Zimbabwe economic pilgrim to Zimbabwe and it will be interesting what Prof Opoku-Agyemang sabbatical to Zimbabwe will do for her in 2020.

Unlike Dr Bawumia who spent just a year in Zimbabwe, her NDC counterpart has been there for more than 18 months.

Zimbabwe appears to be a cooling chamber for running mates of the two rival parties.

When you hear another high-profile politician is heading to Zimbabwe, that person could be your next vice-president.