Sammy Gyamfi, National Communications Officer of the NDC has questioned the basis for the prosecution of leaders of Christ Embassy Church for organizing an event that has the potential of super-spreading COVID-19 in the country, a cause championed by civil society group, OccupyGhana.

The Ghana Police Service was after the leadership of the Christ Embassy Church in Accra for organizing a mass youth event at the Fantasy Dome, Trade Fair Centre in Accra in total disregard for COVID-19 protocols.

A statement from the police on Sunday said the youth event was “in flagrant disregard of COVID-19 protocols”, adding that the leaders are being sought after for questioning as well as management of the event facility.

The event has been roundly condemned by Ghanaians, especially on social media.

In condemning the event, OccupyGhana said: “The government must answer to Ghanaians whether or not this event was held on its blind side, and if so, how was that possible? Was the police present at the event, and if so, why? Were government officials invited and were they present? Were the venue owners present, and did they take any steps to prevent or stop this?

While the authorities investigate this matter, we call on the government to immediately stop any further meetings and apply the law on COVID-19 protocols to the organizers of this event to the fullest extent possible.”

But reacting to the statement from OccupyGhana, Sammy Gyamfi wrote on his Twitter timeline, “Where was OccupyGhana when politicians were gathering thousands during the 2020 election campaign in breach of COVID protocols.”

When was the last time these hypocrites visited pubs, nightclubs and markets in the country? Or is it the case that the church is a soft target?”

The organizers of the mass Christian gathering held at the Dome have been arrested.

According to Rainbowradioonline, “the leadership of the church that led this mass crusade has since this morning been arrested by the Ghana police and investigations has already commenced as to who gave them the permit to organize such a mass gathering crusade”. 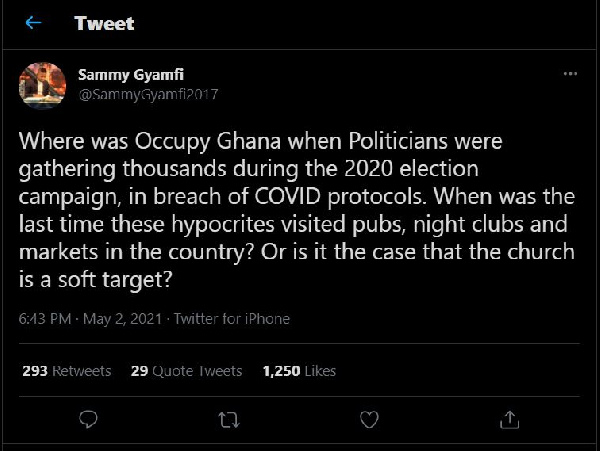 My Wife Told gym Instructor, “Oh yes Baby you are so Sweet” When I Turned, I Could not Believe What I saw

30% of people present at galamsey dialogue know the culprits – Otumfuo

Video: ‘I Will Beat The Hell Out Of Him’ – Sam George Threatens Australian High Commissioner Over LGBTQ+