Former Deputy Minister for Foreign Affairs and ex-head of the West African Network for Peacebuilding (WANEP) Dr Emmanuel Bombande has launched a scathing, unprovoked attack on ex-law lecturer now head of Legal Services at the NCA Dr Poku Adusei, calling him someone who lacks the integrity to participate in any interrogation of issues beyond politics, MyNewsGh.com has filed.

Dr Emmnauel Bombande was reacting to an appearance by Poku Adusei on current affairs program NewsFile in which sympathizers of the opposition were taking him on for destroying himself with propaganda.

“So the man on Newsfile was Dr Poku Edusei? He’s a lecturer too ooh! Aww NPP! NPP! Why do you keep destroying fine brains like this? … ” an NDC activist posted in reaction to Dr Poku Adusei’s appearance.

Commenting on the thread, Dr Bombande wrote that intellectuals like Poku Adusei will eventually become dangerous to society.

“He may be well educated and teaching in a University but he does not have the integrity to interrogate any issue beyond the politics he is entrapped in. Such intellectuals become dangerous to their own society,” Dr Bombande wrote. He continued: “They contribute to mislead, misrepresent and manipulate people. For these types of educated people, a political party is a tribe. They become fascists and good for nothing in society.”

Dr Poku Adusei was Deputy Director-General in charge of General Services (DDG-G) of the Ghana Standards Authority (GSA) and was re-appointed in 2019 to head the legal team of the National Communications Authority (NCA), after a one-and-a-half-year of service at the GSA.

Prior to his appointment, he was a Senior Lecturer at the School of Law at the University of Ghana. 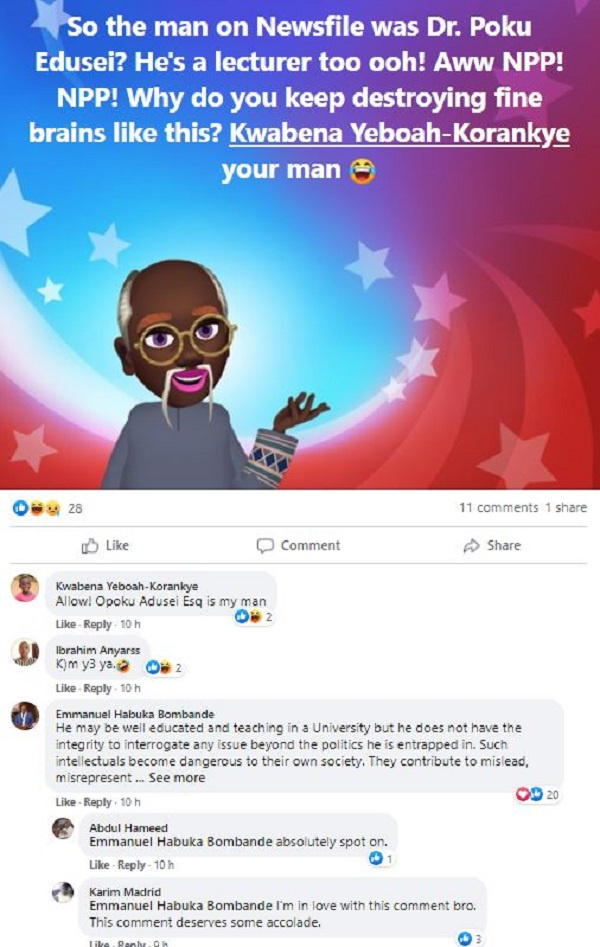